George came in later in the day. He said:

“Well, do you think everything will be ready?”

I said: “Everything will be ready by Wednesday, except, perhaps, you and Harris.”

He said: “Is the tandem all right?”

He said: “You don’t think it wants overhauling?”

I replied: “Age and experience have taught me that there are few matters concerning which a man does well to be positive. Consequently, there remain to me now but a limited number of questions upon which I feel any degree of certainty. Among such still-unshaken beliefs, however, is the conviction that that tandem does not want overhauling. I also feel a presentiment that, provided my life is spared, no human being between now and Wednesday morning is going to overhaul it.” 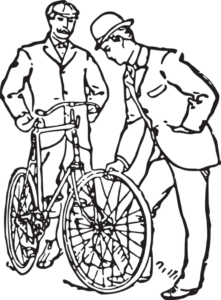 George said: “I should not show temper over the matter, if I were you. There will come a day, perhaps not far distant, when that bicycle, with a couple of mountains between it and the nearest repairing shop, will, in spite of your chronic desire for rest, have to be overhauled. Then you will clamour for people to tell you where you put the oil-can, and what you have done with the screw-hammer. Then, while you exert yourself holding the thing steady against a tree, you will suggest that somebody else should clean the chain and pump the back wheel.”

I felt there was justice in George’s rebuke—also a certain amount of prophetic wisdom. I said:

“Forgive me if I seemed unresponsive. The truth is, Harris was round here this morning—”

George said: “Say no more; I understand. Besides, what I came to talk to you about was another matter. Look at that.”